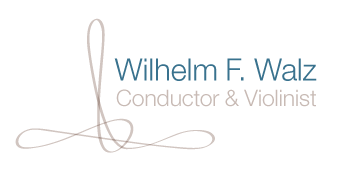 A musician’s performance should convey something, has to go beyond merely playing the notes – it needs to tell a story.
(Wilhelm F. Walz)

This is a characteristic view of Wilhelm F. Walz, who has attracted listeners with his powerful creative vision and commitment to unusual concert programming. His career as a conductor began in the mid-1980s and bears signs of his close affinity to the great Czech violinist Josef Suk, who he met in 1979.

Josef Suk was my teacher, mentor and also my friend and had a decisive impact on the path I followed in music.
(Wilhelm F. Walz)

Both violinists performed in many concerts and recitals together in Western and Eastern Europe. Even after his death, Josef Suk remains an important force in Wilhelm F. Walz’s life. As Principal Guest Conductor of the Suk Chamber Orchestra, since 2000 Walz has given concerts with unusual programming that juxtapose classical Czech repertoire with contemporary works.

He also works with the Suk Symphony Orchestra Prague, in particular in concerts at the Fronhof in Augsburg. Walz initiated this successful series of classical open air concerts in 1999, giving them a distinctive profile over the years as its Artistic Director.

Walz is also the artistic director of two other ensembles:

Since 2009 he has been the conductor of the Orchester Studio Ulmer Musikfreunde (founded in 1945) which performs works ranging from the Viennese Classical period to more recent symphonic repertoire, as well as premiere performances.

The Global Players, founded by Walz in 2005, not only perform in concert, but also focus on pedagogical and social projects. The orchestra is made up of musicians from various countries. The ensemble consists of members of the Augsburg Philharmonic and music conservatory students. The Global Players gives young musicians a platform for showcasing their artistry in benefit concert performances for the Lions Club Augsburg Elias Holl. Recordings of these classical concerts are available on CD.

In addition, Wilhelm F. Walz also appears as a guest conductor with the Virtuosi di Praga, the Dvorák Symphony Orchester and the Bavarian Chamber Philharmonic.

Chamber music is the noblest discipline in the musical work of a violinist.
(Wilhelm F. Walz)

While still a student, Wilhelm F. Walz discovered his love for chamber music and began to give solo recitals and perform with various ensembles. His many premiere performances of violin concertos drew critical acclaim. As the first violinist of the Razumovsky String Quartet, he achieved landmark success in Germany and Western Europe, winning important awards including the ensemble being named a prizewinner at the Helsinki European Broadcasting Union’s International Competition for String Quartets in 1978. The quartet completed an impressive series of radio performances and recordings.

After the quartet disbanded, Walz devoted himself to chamber music performances as the violinist of the Seraphin Trio in the 1980s. Many recital tours took the ensemble to Africa, Asia, across Europe, and to the US, including performances in New York, Vienna, Paris, Stockholm, Moscow, Prague, and Bucharest.

Over the years, an impressive discography, including radio and television productions, was recorded with this ensemble. The complete piano trios by Berwald, Beethoven, Mozart as well as those by Ravel, Shostakovich and Rachmaninoff are available on disc.

For the violinist, chamber music forms the most crucial and essential part of a concert artist’s work.

There is a direct correlation between the quality of an orchestra and the number and quality of chamber music ensembles from within its ranks.
(Wilhelm F. Walz)

As its First Concertmaster, he has achieved outstanding success with the Augsburg Philharmonic while shaping the ensemble sound with his high standard of musicianship. In March of 2013 he resigned from the orchestra and gave a farewell performance of Alban Berg’s Violin Concerto – doing so with his signature passion and earnestness witnessed throughout his decades of service to the Philharmonic.